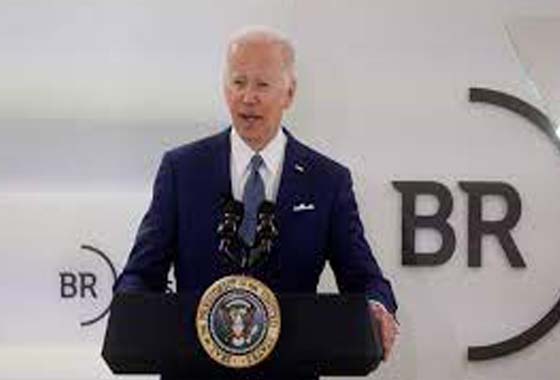 Washington: US unveiled a new $800 million military aid package for Ukraine on Wednesday including heavier equipment such as helicopters, howitzers and armored personnel carriers. US President Joe Biden spoke to his Ukrainian President Volodymyr Zelensky for about an hour earlier in the day as Russia refocuses its efforts eastward, the new frontline of the nearly seven-week old war.

The Ukrainian military has used the weapons we are providing to devastating effect, Biden said. As Russia prepares to intensify its attack in the Donbas region, the United States will continue to provide Ukraine with the capabilities to defend it, he added. This new package of assistance will contain many of the highly effective weapons systems we have already provided and new capabilities tailored to the wider assault we expect Russia to launch in eastern Ukraine.

Zelensky in a tweet said that he and Biden had discussed the additional package of defensive and possible macro-financial aid. The new assistance included some of the heavier equipment that Washington had previously refused to provide to Kyiv for fear of escalating the conflict with nuclear-armed Russia.

Unmanned coastal defense vessels, chemical, biological and nuclear protective equipment, 30,000 sets of body armor and helmets, C-4 explosives and M18A1 Claymore anti-personnel mines will also be delivered to Ukraine. We tailored this list specifically to meet the needs that they have asked for with respect to what’s going on in eastern Ukraine, Kirby said. Before the latest package, the United States had supplied or promised Ukraine 1,400 Stinger anti-aircraft systems, 5,000 Javelins, 7,000 other anti-tank weapons, several hundred Switchblades, 7,000 rifles, 50 million bullets and a range of other equipment.a