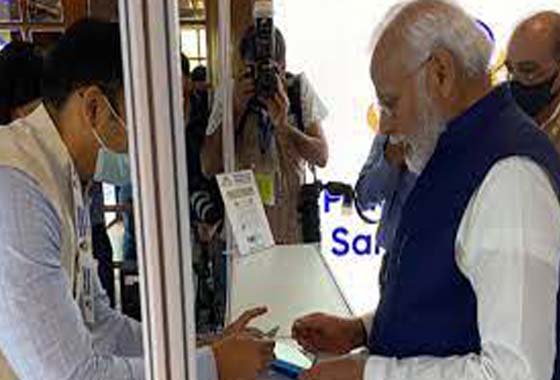 New Delhi:  Prime Minister Narendra Modi dedicated Pradhanmantri Sanghralaya (Prime Ministers’ museum) to the nation on Thursday at New Delhi in Teen Murti Bhavan in block II. The museum is a tribute to every Prime Minister of India since Independence, irrespective of their ideology or tenure in office.

Do visit the Pradhanmantri Sangrahalaya and know more about all our PMs… pic.twitter.com/A8ok1Y4YFL

This Sanghralaya will provide information regarding all the previous Prime Ministers of the country and their contribution in nation building. Modi also bought the first ticket of the museum. PMO in a statement said that starting from the displays on freedom struggle and the framing of the Constitution; the museum tells the story of how our Prime Ministers navigated the nation through various challenges and ensured the all-round progress of the country.

It is aimed at sensitizing and inspiring the younger generation about the leadership, vision and achievements of all our Prime Ministers. Guided by the vision of Modi to honour the contribution of all the Prime Ministers of India towards nation building, the museum is a tribute to every Prime Minister of India since Independence, irrespective of their ideology or tenure in office.

The design of the museum building is inspired by the story of rising India, shaped and moulded by the hands of its leaders. The design incorporates sustainable and energy conservation practices. No tree has been felled or transplanted during the course of work on the project. The logo of the museum represents the hands of the people of India holding the Dharma Chakra symbolizing the nation and democracy.

Information for the museum was collected through resources / repositories with institutions such as Prasar Bharati, Doordarshan, Films Division, Sansad TV, Ministry of Defence, Media Houses (Indian and foreign), Foreign News Agencies, etc. Appropriate use of Archives (Collected Works and other literary works, important correspondences), some Personal items, Gifts & Memorabilia (Felicitations, Honours, Medals conferred, commemorative stamps, coins, etc.), speeches of Prime Ministers and anecdotal representation of ideologies and different aspects of the lives of Prime Ministers have been reflected in a thematic format.