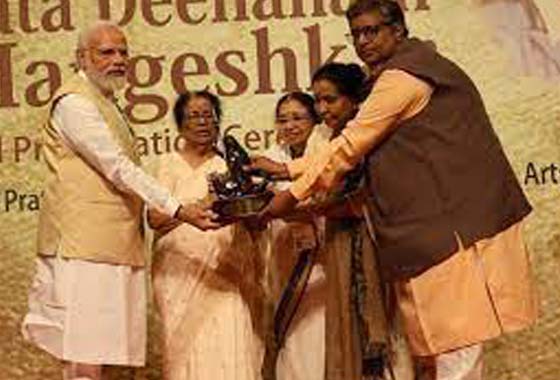 Prime Minister Narendra Modi on Sunday received the first Lata Deenanath Mangeshkar award and remembered the iconic singer as an artiste who was an integral part of nation-building and will be missed on Rakhi. Speaking on the occasion after receiving the award Modi said the journey of songs and the world ran through the journey of Lata Didi, who gave voice to five generations of actors and made India proud. Her journey on this planet came to an end at a time when our country is celebrating Azadi Ka Amrit Mahotsav.

She gave voice to India, even before its Independence. The 75 year journey of the country was always tied to her sur. Our entire nation is grateful for the contribution of the Mangeshkar family to the country. Apart from singing, the passion of rashtra bhakti that was within her was due to her father, he added. He received the award on the 80th death anniversary of Master Deenanath Mangeshkar, the singing legend’s father.

Lata Didi, apart from being the queen of melody, was my elder sister. She taught generations the language of love and compassion. I feel fortunate that she loved me like an elder sister. After many decades, this will be the first Rakhi when Didi won’t be here, Modi said in his award acceptance speech.

Lata Mangeshkar died at 92 in February following multiple-organ failure. Modi said he generally stays away from felicitation ceremonies but made an exception to receive the first Lata Deenanath Mangeshkar award named after the legendary singer whom he considered his elder sister. I cannot adjust myself (in such programmes). But when an award is named after an elder sister like Lata Mangeshkar, then it becomes an obligation for me to accept it because of the affection and right of the Mangeshkar family over me, he said.