He also said that Hindus worship Maa Radha and the song has hurt the sentiments of the people. He alleged that the video hurts the religious sentiments of Hindus. Some vidharmis are constantly hurting Hindu sentiments.

Speaking to the media persons Mishra said that the video Madhuban me Radhika nache is one such condemnable attempt. I am warning Sunny Leone ji, Shaarib and Toshi ji to understand. If they don’t remove the song after apologizing in three days, then we will take action against them. 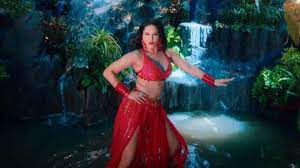 The priests of Mathura on Saturday demanded a ban on this latest video album of Sunny Leone accusing her of hurting their religious sentiments by performing an obscene dance on the song Madhuban mein Radhika nache.

The song which was released last week is sung by Shaarib and Toshi and features Sunny Leone. The initial few words of this song match with the iconic Madhuban mein Radhika naache re song from the 1960 film Kohinoor. That song was sung by Mohammed Rafi and featured late actor Dilip Kumar.