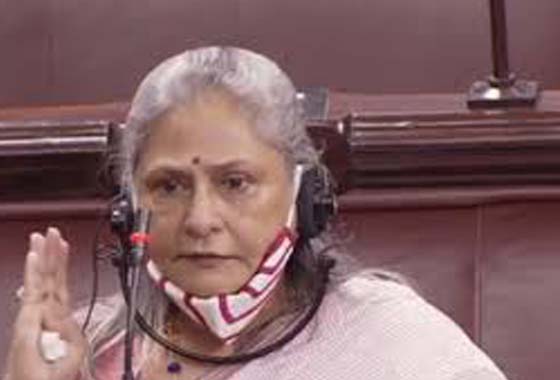 New Delhi: The veteran actress and MP Jaya Bachchan raised the drug using Bollywood issue in Rajya Sabha on Tuesday, on how the industry is being defamed. Entertainment industry provides employment everyday to 5 lakh peoples and indirect employment to 5 million people.

At a time when the financial situation is in a depressing state and employment is at the worst level, to divert the attention of the people, we are being flogged by social media and the Government non-support. The people who have made their name in this industry have called it a gutter. I completely disagree. I hope the Government tells these people, who have made their earnings, name and fame in this industry, to stop using such language, said Jaya Bachchan, in what is being perceived as veiled comment on Kangana Ranaut statements against industry.

BJP MP Ravi Kishan on Monday said in the Lok Sabha that there is drug addictions in the film industry, where people are are seen as role models, and urged the Government to take strict action. Jaya Bachchan slamming Ravi Kishan’s statement a visible emotional she said, just because there are a few people, you can’t tarnish the image of the entire industry. The industry brings international name and recognition also, she said. I was really embarrassed and ashamed that Yesterday, one of our member in Lok Sabha, who is from film industry, spoke against it. “Jis Thaali Mein Khaate Hain Usi Mein Chhed Karte Hain”.