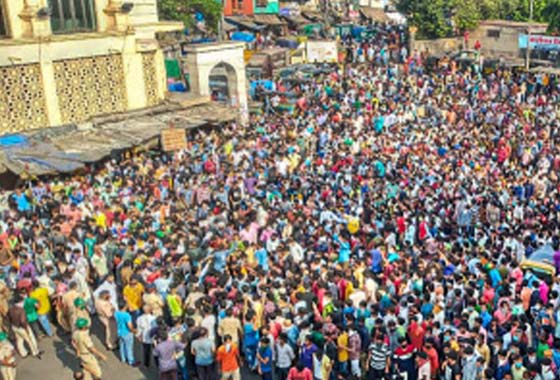 New Delhi: The Migrant workers staged a protest against the extension of the lock down on Tuesday outside Bandra station in Mumbai. Thousands of migrant people jostling, giving a go by to Government warnings about Covid- 19 and social distancing, reveals a video footage.

According to the police sources, most demanded that they be allowed to go home. When the crowd ignored several warnings to disperse, batons were used. Union Home Minister Amit Shah had called Chief Minister Uddhav Thackeray to express concern and offer support. The administration needs to stay vigilant as such events will weaken India’s fight against Covid- 19, he said.

Chief Minister Uddhav Thackeray said to the media that the people had gathered outside the station as they thought “the trains will start running and they will go home…Someone said something and hence they gathered”. “Don’t play with their emotions. They are poor people. I warn you don’t play with their emotions,” he said. The crowd mostly comprised migrant labourers who live in the slums around Bandra station. With no jobs, police messages that food would be delivered to them or they could shift to a camp, do not convince them.

The countrywide lockdown, which has been extended till May 3, has hit migrant workers hard. Most are daily wage labourers who lost their income. Despite government promises of free food, many have been unable to get two meals a day. The lack of any form of transport meant most of them have not been able to go home to their villages either.

Aditya Thackeray in a series of tweets blamed the Central government’s lack of initiative to send the migrants home. “The current situation at Bandra Station, now dispersed or even the rioting in Surat is a result of the Union Govt not being able to take a call on arranging a way back home for migrant labour. They don’t want food or shelter, they want to go back home,” he tweeted.