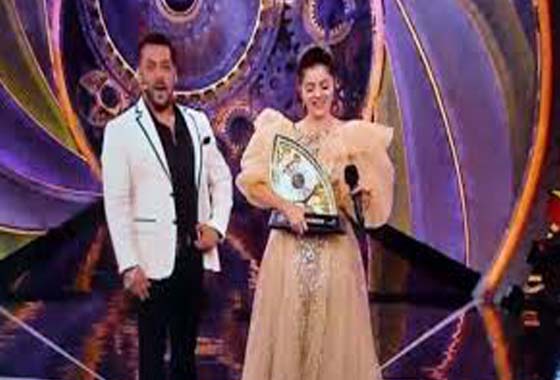 Rubina Dilaik, Rahul Vaidya, Aly Goni, Nikki Tamboli and Rakhi Sawant competed for the winner’s trophy. Rakhi Sawant was the first of the five finalists to be eliminated while Aly Goni was the second one to leave the house.

Nikki Tamboli got evicted after that. Ahead of announcing the final results, the voting lines were declared open for a while. Salman Khan gave the contestants a choice of quitting the show and taking home a sum of ₹ 14 lakh. All the finalists were given 30 seconds to make their decision before pressing the buzzer. Rakhi Sawant decided to walk out of the show with the money offered.

Salman Khan hosted the Bigg Boss- 14 finale with a bang. He also gave a special performance along with Bollywood veteran Dharmendra, who was one of the guests on the finale. The actors recreated evergreen Sholay dialogues on stage. Salman Khan and former Bigg Boss contestant Nora Fatehi burnt the dance floor.