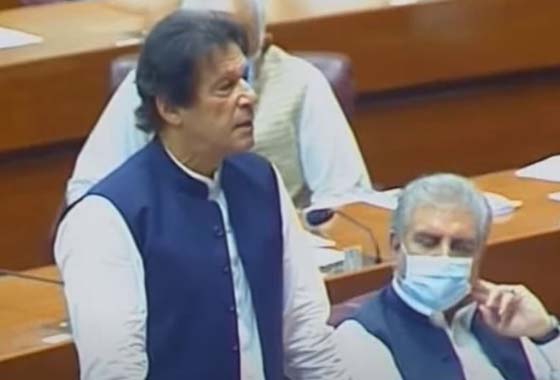 Islamabad: Pakistan Prime Minister Imran Khan called the Al- Qaeda Chief Osama-Bin- Laden a “Shahid” (martyr) on Thursday in the National Assembly. Addressing the National Assembly about his Government’s Foreign policy, he said Pakistan had to face immense “humiliation” in the past despite it supporting Washington in the war on terror.

He also said that Osama-Bin- Laden’s killing on Pakistani soil by US Navy seals in 2001 had caused a lot of embarrassment to the country. Reacting the killing of Al- Qaeda Chief, in the Pakistan garrison town of Abbottabad, he said. The Americans came to Abbottabad and killed, martyr Osama-Bin- Laden.

What happened about that? The entire world cursed at us and spoke ill of us. We helped the Americans in war on terror but the embracement we had face for their allegations of Pakistan being safe haven for terrorists in very terrible. Our allies is secretly coming into our country and killing a terrorist and we don’t even have an idea, he added.

Imran also recalled US drone attacks in Pakistan saying the Government at the time had opposed them. When the former US Military Chief Admiral Mike Mullen was asked at US Senate hearing why drone attacks were being carried out despite Pakistan’s objection. Mullen said they have carried out with Pakistani Government’s for mission, he said. Pakistan did not know whether it was US’s ally or foe in the war on terror. Such incidents caused huge embracement to overseas Pakistanis, he said.

Pakistani opposition leaders criticized on the PM remarks, that Bin- Laden brought terrorism to our lands and the PM calls him ‘Shahid’ said Khawaja Mohammed Asif, a senior PML leader, Senator Mustafa Nawaz Khokhar of PPP called the PMs National Security threat. If Laden is a martyr what is the status of the civilians and members of our armed forces who embraced martyrdom in Al- Qaeda attacks, he asked.