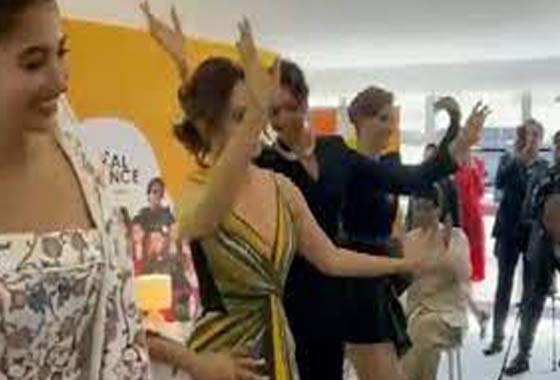 At the event Indian folk singer Mame Khan, who is also one of the attendees at the film festival sang beautifully. He requested Deepika Padukone and other actresses to dance together. And so they did. Deepika Padukone did a little bit of Ghoomar on stage and she was joined by Tamannaah Bhatia, Pooja Hegde and Urvashi Rautela.

Bollywood actress Deepika Padukone is part of the eight member competition jury of the Cannes Film Festival along with prestigious names such as actor and filmmaker Rebecca Hall and Iranian filmmaker Asghar Farhadi. The actress began her jury duty at Cannes by attending a conference with fellow members last night.

Bollywood actress Deepika Padukone spoke at the inauguration of the Indian pavilion at the Cannes Film Festival on Wednesday, she said that India’s cinematic journey so far, I feel we have a long way to go as a country, I feel really proud to be here as an Indian and to be representing the country. But when we look back at 75 Years of Cannes, I have said earlier also that there have been only a handful of Indian films and Indian talent that have been able to make it and I feel like collectively as a nation today we have it.

The Indian delegation at the festival are Anurag Thakur, filmmaker Shekhar Kapur, Ricky Kej, Prasoon Joshi, folk singer Mame Khan and actors Nawazuddin Siddiqui, R Madhavan, Pooja Hegde and Tamannaah Bhatia and others attended. This year, India has been chosen as the first Country of Honour at Marche du Cinema.