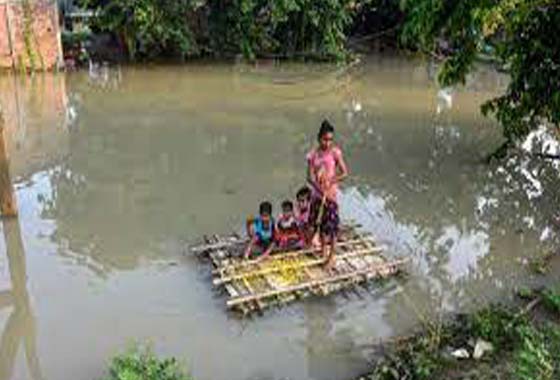 Guwahati: Pre- monsoon heavy rains has hit over 27 districts of Assam, heavy floods triggered in the State affected 6.6 lakhs people and more than nine people has died. Assam Government shifted more than 48K people have been shifted to 248 relief camps. Assam Government will provide financial assistance of ₹ Four lakh each to the families of those who died.

Pre- monsoon rains hit Hojai and Cachar districts. More than 1 lakh people have been affected in each district. The army has rescued more than 2K people trapped in Hojai district as part of ongoing rescue efforts. Dima Hasao district in South Assam remains cut off for the fifth day. Landslides triggered by rain have cut off road and rail links to Dima Hasao.

Pre-monsoon rains hit road and rail connectivity to the Barak Valley as well as vital parts of Tripura, Mizoram and Manipur since Sunday. The Government has decided on a partnership with regional airline Flybig to operate airplanes from Barak Valley. The ticket price has been fixed at ₹ 3K, the Government will bear the additional charges, sources said.

Torrential rain hit the northeastern states of Assam, Meghalaya and Arunachal Pradesh since the last two days. The Met office in Guwahati has issued a warning widespread rain across the region over the next four days. The State has been struggling to maintain the supply of essential commodities in the flood-hit areas and restore communication channels.