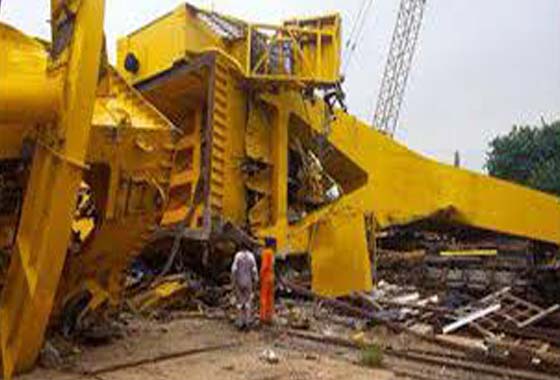 Vishakhapatnam: Eleven persons were crushed to death when a giant crane crashing down at Hindustan Shipyard Ltd in Vishakhapatnam on Saturday. Four regular employees of HSL and seven contract workers were among the deceased.

The accident happened around noon when the crane, weighing 70 tonnes and standing 100 feet tall, collapsed while its load holding capacity was being tested. HSL had outsourced the operations of the crane to Greenfield Company, which had co-opted employees from another two companies, leading engineers and Squad 7, for maintenance operations, said Vishakhapatnam Collector V. Vinay Chand.

The base portion and the over head cabin of the crane separated during the test, resulting in the collapse. 10 ten persons were in the cabin when the crushed. All of them died. One more person also died, whose identity we are trying to find out, said Collector. Hindustan Shipyard a Central Government undertaking is into ship building, ship repairs and submarine construction. It also refits, designs and constructs offshore and onshore structures.

The deceased have been identified a Kakara Prasad, V. Ramana and Satya Raju from HSL Electrical section and T. Jagan Mohan Rao from the company’s maintenance department. The others are P. Nagadevudu and Bhasker from Lead Engineers, M.N. Venkata Rao, P. Shiva Kumar and B. Chaitanya from Greenfield and crane operator T.V. Ratnam from Squad 7. HSL would conduct and internal enquiry while another enquiry committee of the State Government would probe what made the crane, which was being tried out for the first time, collapse, said the Collector.

The crane was built by Mumbai based Anupam Cranes and was procured by HSL around two years back. The manufacturer, however, had not conducted a trail run to certify its load holding capacity. HSL also held back some the payment due to the company for not conducting a trail run, sources said.