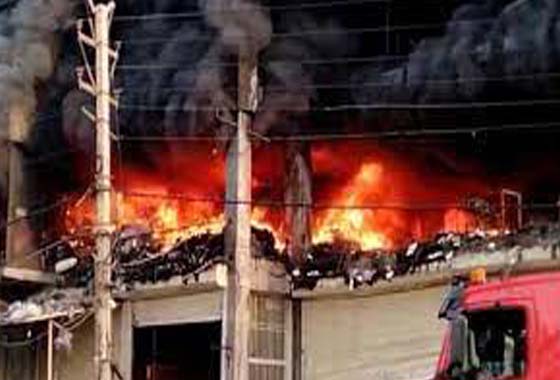 New Delhi: A major fire broke out in a four storey commercial building in West Delhi’s Mundka on Friday evening caused to the death of 27 people and 12 injured. According to the police sources the injured have been admitted to the Sanjay Gandhi Hospital. The owners of the company — Harish Goel and Varun Goel — have been arrested. The owner of the building, which did not have safety clearance from the fire department, has been identified as Manish Lakra and he is on the run, police said.

At least 50 people have been rescued from the building and some were still trapped inside, police said. Police are yet to share details about the identity of the victims. The Delhi Fire Service deployed cranes to rescue those trapped in the blaze. Smoke from the fire spread to the entire building and some people jumped off through the windows to save themselves; while some others used ropes to climb down.

DCP (Outer) Sameer Sharma has said the fire started on the first floor of the building, the office of a CCTV camera and router manufacturing company. According to fire department officials, information about the blaze was received around 4.40 pm following which 24 fire tenders were rushed to the spot.

President Ram Nath Kovind, Prime Minister Narendra Modi, Delhi Chief Minister Aravind Kejriwal and Congress leader Rahul Gandhi are among the several politicians to mourn the loss of lives in the tragic incident. PMO in a tweet said that Prime Minister has announced ₹ 2 lakh exgratia to the members of the bereaved families, and the injured will be given ₹ 50,000. Home Minister Amit Shah said that he is in constant touch with the authorities and that the NDRF has been pressed into service.