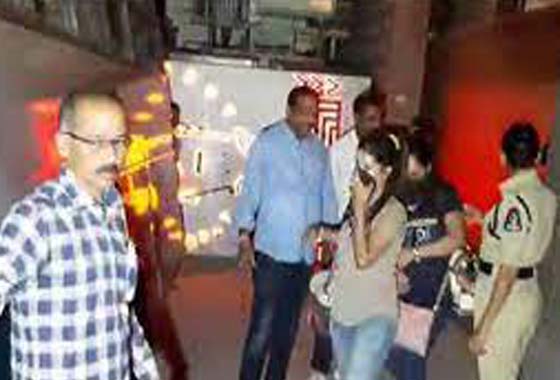 On the tiff of information the police raided on the pub for consuming drugs by the members in the pub after the time limits bar. Most of the arrested persons belong to high influenced political, official and the celebrities. Most of the arrested are from Tollywood industry, daughter of former AP DGP, son of TDP MP- Guntur and the daughter of Tollywood actor Naga Babu and five foreigners.

Police collected all their address, Aadhaar Cards, phone numbers and filed an FIR against them. Later they released the detainees and asked them to attend whenever they need for their investigation.  According to the police, pub manager Mahadaram Anil Kumar and partner Abhishek Vuppala were arrested, third accused Arjun Veeramachineni was absconding.

Task Force, along with local police, raided the pub at 2 a.m. hours and found more than 100 persons consuming liquor in the pub. On thorough checking of the premises, five small packets containing white powder suspected to be cocaine were found in one of the plastic containers used for holding drink straws present on the bar counter in the custody of its manager Anil Kumar.

The partners of the Pudding & Mink Pub allow only a few selected elite customers and their guests to have access to their pub with the sole intention of earning money and they run the pub till the early hours (4 a.m.) An app is being maintained wherein a code is generated for each customer and the customers can have access to the Pub only by entering the code at the main entrance.

A case under Section 8(c), 22(b) and 29(1) of NDPS Act was registered at Banjara Hills police station. As the police found some packets of suspected cocaine, all those present in the pub were whisked away to the nearby Banjara Hills police station, where they were questioned. Ironically, singer and winner of Big Boss Telugu reality show Rahul Sipligunj, who was among those detained, was part of Drug-free Hyderabad campaign launched by the police. He sang a song as part of the campaign.

Taking a serious note of these violations and the police station concerned failing to act, Hyderabad Police Commissioner C. V. Anand suspended Station House Officer of Banjara Hills Police Station and issued a charge memo to Assistant Commissioner of Police, Banjara Hills, M. Sudarshan. Action was taken against them for their negligence towards their legitimate duties in the control of narcotics in pubs and bars. The police and newly-formed Hyderabad Narcotics Enforcement Wing (H-NEW) is not only acting tough against peddlers but also booking cases against those found to be consuming the drugs.