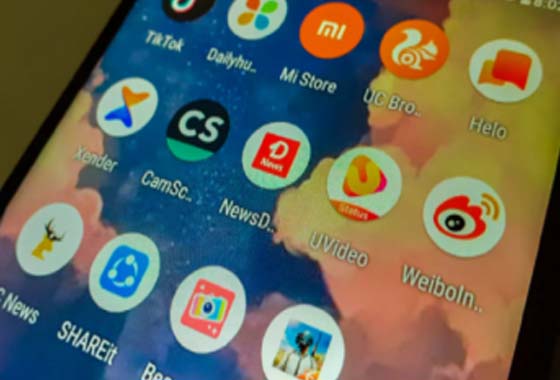 New Delhi: The Union Government blocked as many as 59 Chinese apps on Monday. The blocked apps are i.e. including popular ones such as TikTok, UC Browser, V-Chat; Share it and Cam Scanner, for engaging in activities which are prejudicial to Sovereignty and Integrity of India, Defence of India, Security of State and Public Order.

The move against malicious apps announced by the International Technology Ministry came after several complaints of stealing of user data, which was allegedly being surreptitiously transmitted to servers located outside India, the Government said.

Without naming China separately Indian Cyber Crime Coordination Centre in the Home Ministry also recommended that apps should be blocked. This move will safeguard the interests of crores of Indian mobile and internet users. The decision is targeted move to ensure safety and Sovereignty of Indian Cyber Space, said the Government.

Sources added that the decision will pinch as it will affect millions of dollars revenue. The decision to block the apps was not a complete surprise as there had been wide spread speculation that there can be regulatory action against Chinese apps, with several of them accused of transferring user data to servers in China.

Modi Government has shown its resolve and dexterity to engage China on multiple fronts and hit China where it hurts the most. This is India’s first salvo to China after the border clashes, showing that India has a diverse range of retaliatory options, said an official source. The assessment is that this will significantly erode the valuation of several Chinese companies. With actions to people’s cameras and thesis, these apps be lightened the risk of espionage as they could access other devices and servers that may be linked.

This have been raging concerns on aspects relating to data security and safeguarding the privacy of 130 crore Indians. It has been noted recently that such concerns also pose a threats to Sovereignty and security of our country, said the IT Ministry.