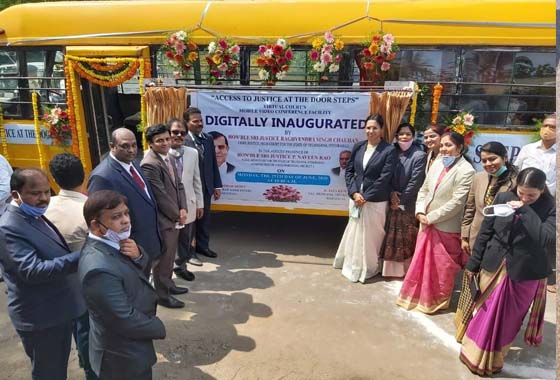 Hyderabad: The Telangana High Court has launched a mobile video conference District Court facility, in a first such initiative in the country, taking technology to the door step of lawyers who have no computers or internet facility at their homes in Warangal on Monday.

Known for its pioneering digit Court initiative in the country, the Telangana High Court had gone virtual and was holding Courts through video conferencing mode ever since the lock down was announced three months age.

In this facility, a mobile van would go to designated area and lawyers have to simply get into the van, equipped with video conference system, and argue their case. This facility is introduced in Warangal for the first time in the country.

For lawyers not tech savy, separate computer rooms were allotted at Judicial Academy in Secunderabad. Now District Judiciary too is going digital. If the experiment in Warangal is successful, then we will ask all District Collectors to provide vans with computers to provide virtual argument space for lawyers at their door-steps if they are unable to equip themselves at their homes on their own, said High Court Registrar General A. Venkat Reddy.