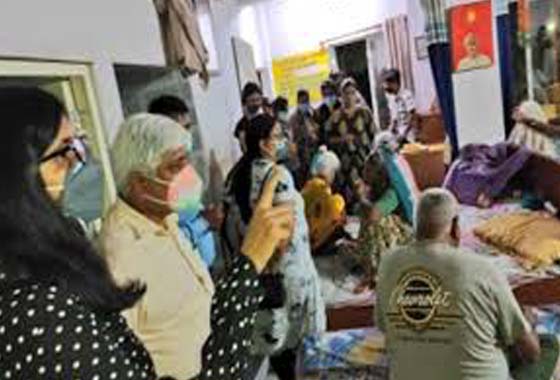 After receiving a complaint that some senior citizens were being tied up and beaten at the old age home when they requested to go back home, Maliwal along with the social welfare minister and her team conducted a surprise inspection of the old age home on Friday night. The DCW said of the 19 rescued most are specially-abled and were being kept in a small cramped up room.

“There were no separate wards for men and women. Many of them were being forced to share beds. The room was in a miserable condition. The stench in the room was unbearable as there was only one toilet and many elderly had defecated on the beds. There was no caretaker either and the old residents were made to clean the premises themselves,” said a DCW official.

The commission also said that the old age home violated norms to check the spread of Covid-19 contagion as zero social distancing was being practiced and no provision of masks and sanitizers was made available for the elderly. Taking stock of the situation, the SW minister ordered for immediate action and has directed the SW department to ensure that the residents are rehabilitated.

Maliwal also issued summons to the Social Welfare director and the Delhi Police to ensure registration of an FIR against the management of the old age home and the NGO. “Parents sacrifice their entire life raising their children and once they grow old, they are left to suffer in such miserable conditions… Strict action will be taken against the management and the NGO,” said DCW chief Swathi Maliwal.