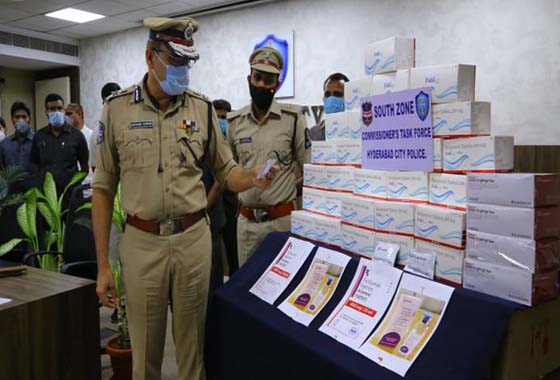 The police arrested eight people from Hyderabad and one from Delhi. The cops are investigating how the men got access to the drugs given that these are meant to be sold to individuals. The drugs are prescribed only for hospitals and institutions working with Covid- 19 patients. The accused from Delhi is believed to have flown in with Actemra.

Speaking to the reporter Hyderabad CP Anjani Kumar said that they will investigate the source of the medicines; among those arrested K. Venkata Subramaniam, Rahul Agarwal and Santosh Kumar are businessmen. Mohammed Shakeer, K. Kishore and Saif Ali Mohammed are wholesale drug distributors. Gagan Khurana is Delhi based commission agent and Firdous Mohammed is employee in a pharma distribution company.

Subramaniam told to the police he purchased some of the drugs from a prominent company situated at Sangareddy. Later he and the other accused through their network sold the drugs to needy persons and had been running the racket for atleast since one month.

Pharmacist booked for cheating: Panjagutta police registered a case against a pharmacist who had offered to sell three Remdesivir injections to the family of a Covid- 19 patient at an inflated price.

According to the police sources, pharmacist had demanded Rs. 63K for each injection while the MRP is Rs. 5, 400, through one of my friends. As per the complainants version that, I came to know that one pharmacy was selling it, I rushed to the pharmacy, after sometime, the seller handed over three injections for Rs. 63K outside the shop. The police booked the pharmacist under section 420 of IPC.