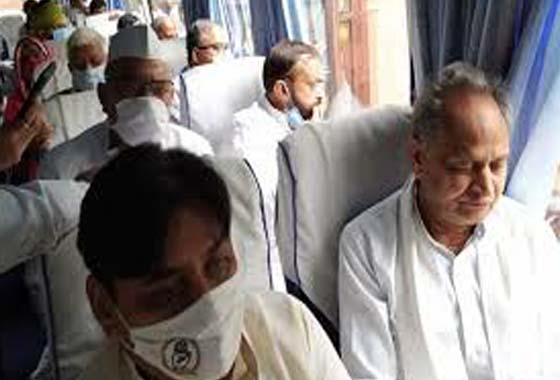 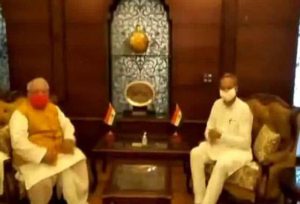 Chief Minister Ashok Gehlot reached the Raj Bhavan along with his supporting MLAs in a bus on Friday afternoon. But the Governor’s security personnel stopped the MLAs outside the gate and allowed the Chief Minister to meet the Governor. According to the sources, if Governor not allows them to show their strength in the floor test on Monday, Gehlot and his MLAs decided to stage a Dharna infront of the Raj Bhavan.

Chief Minister Ashok Gehlot was in hurry to show his strength in the assembly to safeguard his chair. He also blamed Governor, he did not hear to him. He is under the pressure of central government, he alleged.

Rajasthan High Court adjourned the hearing till to Monday, High Court judge ordered to the speaker CP Joshi, maintain stetus-quo on the disqualification of 18 rebel MLAs including the Former Deputy Sachin Pilot. This creates angry and insecurity to Gehlot and he rushed to the Raj Bhavan to urge the Governor for floor test.

He alleged that the BJP is trying to de-throne him with the help of rebel MLAs, in the past in which BJP did in Madhya Pradesh and Karnataka. Before entering to the Raj Bhavan Gehlot said to the media persons outside the Raj Bhavan’s gate, if Governor not taking appropriate decision on the floor test, the people may surround the Raj Bhavan. Then he has no responsibility, he threatened.