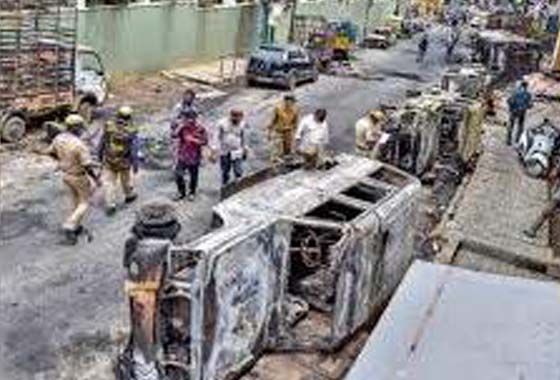 The mob set fire to the MLAs house, and two police stations near by the MLAs house and torched many police vehicles. One section of people was got angry a FB post against the prophet and they attacked on the MLAs house, the FB posted person is the nephew of the Pulakesi Nagar Congress MLA Akhanda Srinivasa Murthy. The police arrested the nephew of MLA Naveen at around 2 am on Wednesday. By then, the mobs has attacked KJ Halli and DJ Halli police stations, and burnt police vehicles and injured scores of personnels. 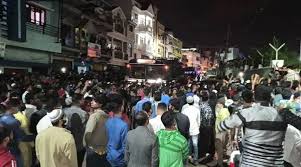 Police arrested Social Democratic Party of India, the State unit leader Muzammil Pasha and other 145 persons in connection with violence in which 17 vehicles were torched and 73 others damaged. The violence left 70 police personnels, including senior officers and 35 others injured. The mayhem in Kavalbyrasandra, KJ Halli and DJ Halli ended in the early hours on Wednesday after reinforcements rushed to troubled localities, burst tear gas shells, resorted to lathi charge at several places and opened fire to quell violent agitators.

Police officials were tight lipped about the places where police opened fire. However, sources said 20 rounds were fired. Two of the dead were identified as Yasan Pasha and Wazid Ahmed of KJ Halli. The protests began around 7 pm on Tuesday, with a small group of people gathering at the Pulakesinagar MLA’s house in Kavalbyrasandra with their grouse against Naveen and another group approaching KJ Halli police station with the complaint against FB Post. Soon the protest took violent turn, with mobs vandalizing the MLA’s house and that of his nephew house nearby.

A bid to torch Naveen’s house was foiled as a fire tender arrived in time. While police sought time to look into the complaint, mobs attacked KJ Halli and DJ Halli police stations. Vehicles parked on the roadsides in both station limits were torched and turned into barricades to prevent reinforcement from rushing in.

After bursting of tear gas shells and lathi charge failed to disperse the mobs, police opened fire. Senior IPS officer, including Additional Commissioners police, were stationed in KJ Halli and DJ Halli. Para Military forces of Karnataka State Reserve police carried out a flag march in the lanes of DJ Halli and KJ Halli from morning to night.

The roads are appeared to go into a lock down as restrictions remained indoors, shops did not open and traffic was restricted.