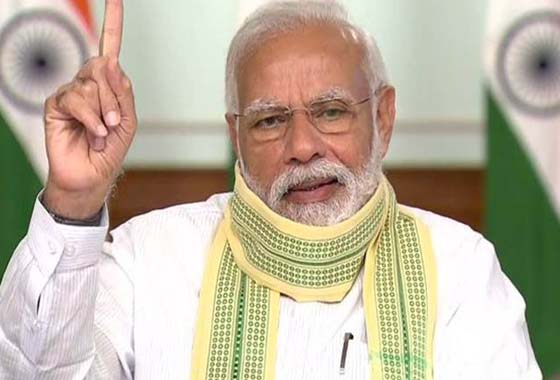 India honours the spirit of friendship… she is also capable of giving an appropriate response to any adversary, without shying away

New Delhi: Prime Minister Narendra Modi on Sunday asserted that those who cast an evil eye on Indian soil had received a befitting reply and that while India sought peace, it could look the adversary in the eye and respond adequately to protect its sovereignty.

In a stern message to China and tensions on the border in Eastern Ladakh on the brutal clash in Galwan Valley which claimed the lives of 20 Indian soldiers and an unspecified number of Chinese troops, he said. India honours the spirit of friendship; she is also capable of giving an appropriate response to any adversary, without shying away. Our brave soldiers have proven that they will not let anyone cast an evil eye on the glory and honour of “Mother India”.  Modi paid tributes to the soldiers who died and said the country was one with the families who lost their loved ones, he said.  He pointed to the pride of the families that the soldiers had died in the service of the nation, said Modi.

Their sentiment to the country constitutes the true power, the might of the country. You may have seen the parents of martyr referring to sending other sons, other family members too, to join the army, he added. He also said a resolve to make India self- reliant would be a fitting tribute to the fallen martyrs.

Rajni ji has return to me from Assam. She says after watching what happened in Eastern Ladakh, she has taken a vow and the vow is that she will buy only local products. And for the sake of local, she will also be vocal, he said. Modi sought to convey reassuring message for the year that has seen India and the world face the Covid- 19 challenge, saying though the country faced a convergence of challenges, it would overcome and become stronger.

Irrespective of the magnitude of the calamity confronting us, India’s Sarkar, way of life, inspires one and all to serve selflessly. The way India extended a helping hand to the world during difficult times, it has reinforced India’s rule in ushering in peace and development, said Modi.