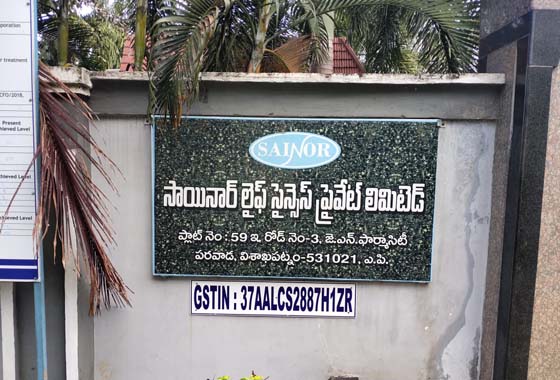 Visakhapatnam: A gas leak caused for two deaths and four injured at Sainor Life Sciences, Pharma City, and Parawada in Visakhapatnam at around midnight on Monday.

Medzol vapours leaked from one of the reactors of the Pharma unit, resulting in the death of two. Another four who fell ill were rushed to the hospital and condition of one of them is reported to be serious. The Sainor Life Sciences factory Shift In-charge Narendra and M. Gowri Shanker were died on the spot. The deceased were identified as Narendra, shift in charge, and M. Gowri Sankar. The four persons who are undergoing treatment at RK Hospital are helpers. The situation has been brought under control.

District Collector Vinay Chand, Commissioner of police RK Meena visited the chemical unit, which has been shut down. District Collector ordered an inquiry into the incident. Chief Minister YS Jagan Mohan Reddy inquired about the gas leak incident in the pharma unit in Parawada. Officials informed him that in all six staff were affected and two of them died on the way to the hospital. The situation is brought under control and the unit has been closed, they explained. The Chief Minister directed the officials to extend better medical treatment to the injured.