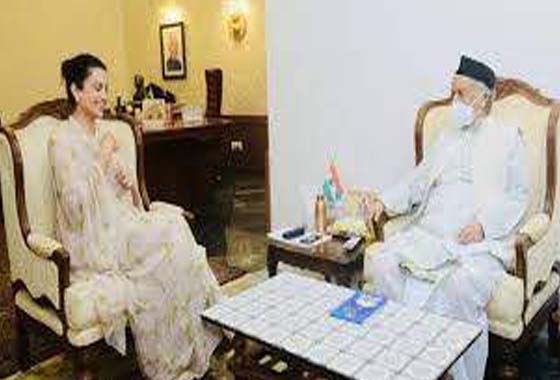 Mumbai: Bollywood actress Kangana Ranaut met Governor Bhagat Singh Koshyari at Raj Bhavan on Sunday; Kangana was accompanied by her sister Rangoli. She met Governor and complained about the ‘Injustice’ done to her and the ‘Point of View’ and sought “Justice” during her 45 minutes meeting with Governor.

The meeting took place days after the Siva Sena ruled BMC demolished alleged illegal alterations at Kangana’s Bandra bungalow following a verbal spat between the Siva Sena party and Kangana. “I told to the Governor Bhagat Singh Koshyari about the injustice meted out to me and what happened was improper. It was indecent behaviour”, she said. I am not a politician and had met the Governor as a common citizen, she added.

Kangana in her tweet said that “A short while ago, I met his Excellency the Governor of Maharashtra Shri Bhagat Singh Koshyari ji. I explained my point of view to him and also requested that justice be given to me. It will restore faith of common citizen and particularly daughters in the system”, she added.