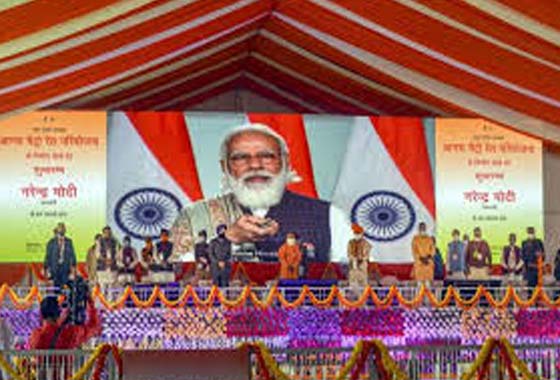 Lucknow: Reforms are needed for development and some laws from the past century have become a burden now, said Prime Minister Narendra Modi on Monday, amid the farmers protest row over new farm laws.

He launched the Agra metro rail project via video-conference, Modi said the reforms carried out by his Government are also getting reflected in election results. Work is being carried out on 1,000-km of new metro rail lines in 27 cities across the nation, PM Modi said.

The over ₹ 8,300-crore Agra Metro project has two corridors with a total length of 29.4 km and will connect major tourist hubs like Taj Mahal, Agra Fort and Sikandara with railway stations and bus stands.The project is scheduled to be completed in five years. Agra has a population of 26 lakh and 60 lakh tourists visit the city every year.

During his brief address, PM Modi made no direct reference to the new laws or the farmer protests. His pitch on the importance of reforms comes ahead of Tuesday’s “Bharat Bandh” over the three new farm laws.

Modi also said “Reforms are needed for development. Reforms are very much needed for a new order and to give new facilities. We cannot build the next century with the laws of the previous century”. “Some laws that used to be good in the past century have become a burden in the present century. Reforms should be a continuous process,” he said.

PM Modi said his Government is carrying out “holistic reforms”. PM Modi said in recent years the poor and the middle class have showered their “unprecedented blessings” on the efforts of the Government. He said their support “gives me the courage to do new things and take new initiatives”.