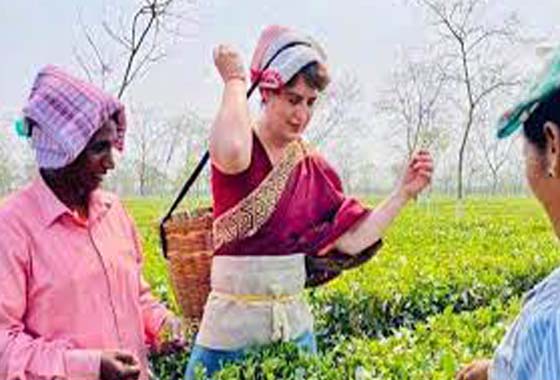 Guwahati: AICC General Secretary Priyanka Gandhi Vadra participated at a rally in Assam Tezpur on Tuesday. She spoke with women workers at a tea estate and carrying a basket on her back, joined them in plucking the cash crop about the gardens. She attempted a few steps of the jhumur, a folk dance of the tea tribe, and was gifted a white and red bordered saree which women wear while dancing.

In her address at the rally she alleged that “More than three lakh farmers are sitting on a dharna for the last two months, barely four to five kilometers away from where the PM stays, but he has not gone to meet them. What is the problem if he goes to meet them once, talk and if the farmers have a problem with the laws, then make changes for their benefit… but the policies of this government is for the rich and powerful and not for the people”.

The Congress and its allies have been campaigning on issues of rights, including the CAA and NRC, which are sensitive subjects in Assam. The BJP is looking to win the state again on the back of development policies and under Prime Minister Narendra Modi’s brand. Election in Assam will be held on three separate days in March and April. The state has 126 seats in the legislative assembly.

She wore a dark maroon saree, she was seen sprinting down a dusty path and surrounded by her bodyguards, who try to catch up with her as they all run towards the stage. People on both sides of the fenced pathway clapped for her as she continued the dash to the raised pavilion. She ended the sprint with folded hands, and gives a Namaste gesture as the crowd waved back at her.