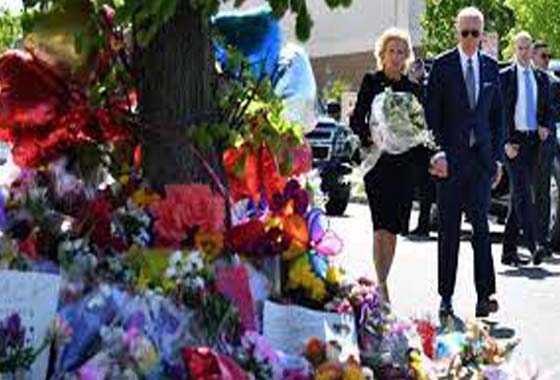 Buffalo: US President Joe Biden called out what he branded the poison of white supremacist ideology behind a deadly mass shooting in Buffalo and in New York. Speaking on the occasion Biden on Tuesday said that racism is being stoked for political gain.

Speaking in the city where a white teen is accused of murdering 10 African Americans in a neighborhood supermarket. What happened here is simple and straightforward terrorism, domestic terrorism, he said. White supremacy is a poison running through our body politic and it’s been allowed to fester right in front of our eyes. No more. I mean no more. We need to say as clearly and forcefully as we can that the ideology of white supremacy has no place in America, he said to applause.

Joe Biden condemning those who spread the lie for power, for political gain and for profit, Biden’s harshest comments were directed at what he described as the perverse ideology of white supremacists that police say inspired the shooter. A hate that through the media and politics and the internet has radicalized angry, alienated, lost and isolated individuals into falsely believing that they will be replaced that’s the word, replaced by the other, he described.