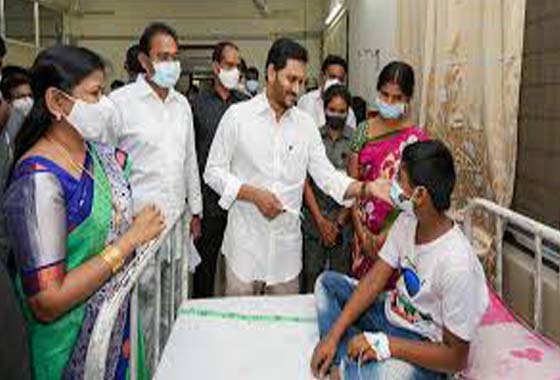 Eluru: AP Chief Minister YS Jagan Mohan Reddy visited Eluru Government Hospital and interacted with the patients undergoing treatment along with health officials. He enquired how they are feeling now and asked the hospital authorities what treatment is being extended.

340 cases have been reported upto Monday morning in Eluru Government Hospital and a 45-year-old man died, while 168 patients have been discharged. At present, 157 people are undergoing treatment and 14 have been shifted to the Government Hospital in Vijayawada for better treatment. Efforts are still on to ascertain the cause of the ‘mystery illnesses in Eluru in Andhra Pradesh’s West Godavari district. Experts from the All India Institute of Medical Sciences, National Institute of Nutrition and Indian Institute of Chemical Technology have been roped in for further investigation. 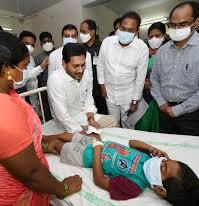 So far, the illness has not spread from one person to another. People from other areas, where Eluru municipality water is not distributed, had also fallen ill. Later, he reviewing the situation with officials, the YS Jagan sought to know the circumstances that led to the mysterious illness, types of tests being conducted on the patients and the results of water and blood samples tested so far. Officials informed YS Jagan that water samples were tested for heavy metals and the results were normal. Virology tests of blood samples also came negative and CT scan reports were also normal, they added.

According to official sources, cases were reported from different parts of Eluru urban, Eluru rural and Denduluru mandals. Even those who consumed mineral water reported symptoms and were admitted to hospital, said officials. A team of specialists from AIIMS-Mangalagiri visited the hospital and interacted with the patients. Samples were collected. Experts from the IICT and ICMR are arriving to further investigate the cause of the illness, they explained.

YS Jagan wanted to know if there was anyone among the discharged to be readmitted and was informed that three such cases were reported. Jagan also instructed them to monitor those discharged and provide them with nutritious food and medicines.  Directing them to closely monitor the situation, he asked them to respond immediately to any emergency.