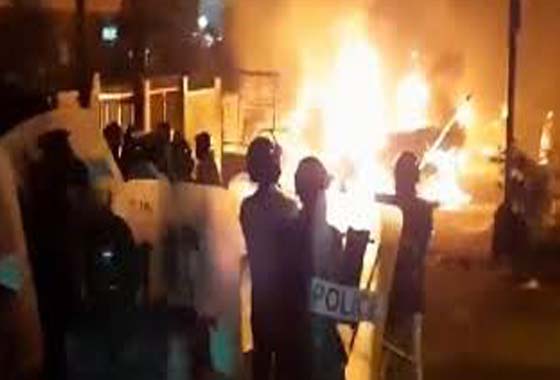 Bengaluru: The police opened fire to scatter the mob on Tuesday night, two people were killed and four people were injured in the police firing. A section of people erupted violence on Tuesday night at the MLAs house in KG Halli in East Bengaluru over an offensive post on a social media platform.

Several policemen were injured as mobsters pelted stones at them. The city is put on high alert following the unrest. Heavy police deployment has been made in KG Halli and DJ Halli following a violent mob attacked policemen and torched police and civilian vehicles. It all started over an offensive post put on a social media platform by one, P Naveen, purportedly a relative of Pulikeshinagar MLA Akhanda Srinivasa Murthy.

Raged over the post, about 15-20 people attacked the residence of the MLA in Kaval Byrasandra on Tuesday night. While attempts to torch the house were thwarted by the police, hundreds of people gathered in front of KG Halli and DJ Halli police stations. MLA Srinivasa Murthy and his family escaped unhurt, when the mob torched his house in Kavalbyrasandra in DJ Halli police station limits.

Before the police could mobilise enough staff, the mob started pelting stones at police vehicles and torching vehicles. As many tried to set fire to police stations, the police resorted to lathi charge and lobbing tear gas shells, several policemen were injured while police vehicles were torched and vehicles of senior police officers were damaged.

As the KSRP platoons, which were called in to contain the situation, advanced towards the rioters, they were pelted with stones from rooftops. At this juncture, the police had to lob tear gas shells. When the mob did not budge and intensified their attack targeting police and their vehicles, the cops fired in the air as a warning shot. However, the mob was in mood to pay heed to the warnings.

Finally, the police had to resort to ‘Golibar’, killing one and leaving 3-4 others injured near KG Halli police station. The situation is still tense in the area and more police forces are being pressed into service. Amidst violence, MLA Akhanda Srinivasa Murthy appealed to the people to maintain peace and legal action will be taken against the person, who allegedly posted the offensive post.

Following the incident, Chief Minister BS Yediyurappa spoke to Home Minister Basavaraja Bommai and instructed him to take all necessary steps to contain further spread of violence. Bommai, who confirmed a death in the police firing, said that people must maintain peace and those who resort to violence will be dealt with an iron fist.

Congress MLAs BZ Zameer Ahmad Khan, Rizwan Arshad and others visited the spot and appealed to the public to stay calm. Police Commissioner Kamal Pant and other senior officers have camped in the area.