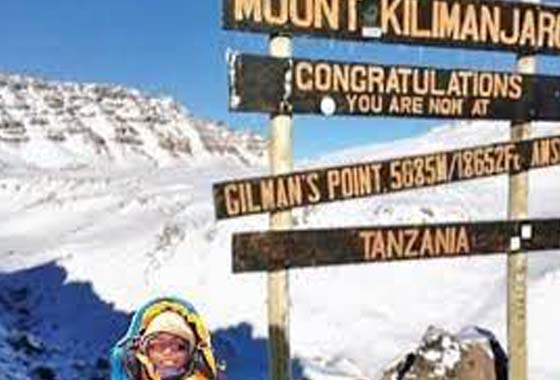 Anantapur: An Anantapur girl Kadapala Rithvika Sri from Andhra Pradesh has conquered the Africa’s highest peak Mount Kilimanjaro in Tanzania. The girl climbed to Gilman’s Point at 5,681 metres above mean sea level on February 25th, along her father and guide.

She is student of St Vincent De Paul English medium school in M Agraharam village in Tadimarri mandal, Anantapur district. Her father Shankar is a cricket coach and sports coordinator in the Special Olympics Bharat wing of RDT, Anantapur. Her father Shankar told to the media that she took Level 1 training in mountaineering at Rock Climbing School at Bhongir in Telangana and Level 2 training at Ladakh. “Rithvika Sri took part in the mountaineering expedition with enthusiasm and she could make it in her first attempt”.

Shankar climbed Mount Kilimanjaro on January 26, 2020. He approached District Collector Gandham Chandrudu seeking financial assistance for his mountaineering expedition. The Collector released `2.98 lakh from the SC Corporation funds for the expedition, he said. Congratulating Rithvika Sri for her mountaineering feat, Chandrudu said he encouraged the girl as she has talent and commitment.