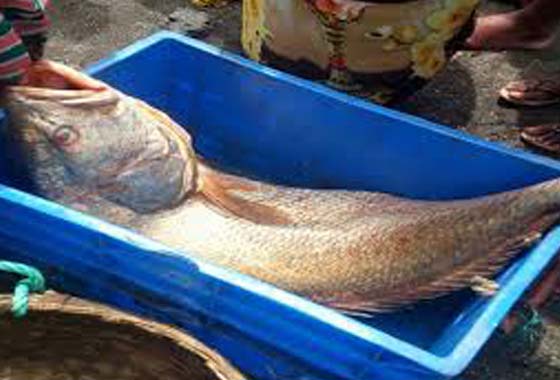 Vishakhapatnam: A fisherman in Guntur district netted a rare fish, whose bladder sells at Rs. 1.4 lakh a kg. The fish is believed to possess medicinal properties and has high demand in China. The fisherman, Doni Devudu from Danapet village in Baptla mandal of Guntur district, caught commonly known the fish as Ghol (Otolithoides Biauritus). Traders from Maharashtra bought it and planned to export it to China.

Devudu could not believe his eyes when he found the fish, locally known as ‘Kachidia’ in his nets. After knowing the information Y. Darakonda owner of Baba Sea Foods at Vadarevu in Chiala mandal of Prakasham district, brought the fish from Baptla for Rs. 1.4 lakhs, said A. Chandrasekhar Reddy, JD, Fisheries Department, Prakasham district. Baba Sea Foods owner said the air bladder of the fish weighed 520 Gms. The fish weighed 24.8 Kgs. The fish purchaser sold the fish to Maharashtra traders.

A Kg of Ghol fish bladder sells for anywhere between Rs. 3.5 lakh and Rs. 11 lakh, depending on its size, in the international market. I got 520 Gms this time, said Darakonda. The bladder is used to make Isinglass, which contains morethan 80% collagen.