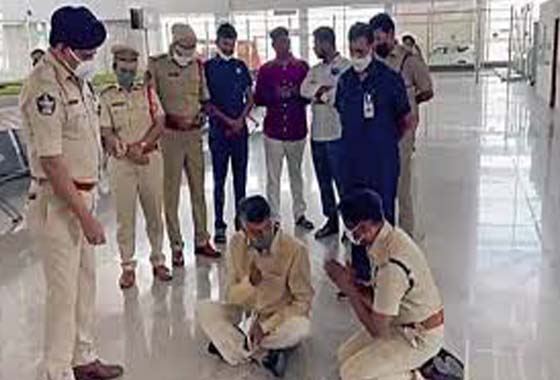 Tirupati: TDP Chief, AP Assembly Opposition leader N Chandrababu Naidu created a fuss at Tirupati airport on Monday morning to stage a protest alleging the ruling party abducting TDP candidates for not filing the nominations in the Municipal elections which are schedule to poll on March 10th. TDP Chief Chandrababu was detained from 10.30 to 7.30 pm at Tirupati airport at Renigunta and he returned to Hyderabad as his tour schedule.

TDP Chief argued with police officers why they are detaining him? He is the former CM for 14 years to the state, is it Democracy to detain him? The police officers humbly said there are restrictions on protests under section 30 of police act and Covid- 19 protocols. Under these acts huge gatherings and assemblies are not allowed in the city. If you want to stage a protest please obtain the permission with the SEC and the Covid- 19 protocols. The code of election is also inforce in the state to not allow the huge gathering and meetings.

When the police not allow him to go outside the airport, he squat on the floor at airport lounge. After half an hour, a police officer sits on knees infront of him and requested to take a seat, but he refused. After the media coverage, he sat on a chair which brought by the police and also consumed coffee and ate dry fruits. The police tried to deport him to Hyderabad twice at 3.30 and 4.30 pm, but he refused to go to Hyderabad. At last he returned to Hyderabad at 7.30 pm flight from Tirupati airport.